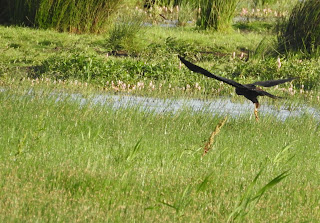 It has been a fabulous week for Birds of Prey. Marsh Harriers in  hunting party (Ad F + 2 juv) over the Budge field. Finally made seeing Snipe easy (30+ in the air together). Merlin (sadly one hit and killed by car). Huge female Sparrowhawk (Gossie proportions) and similarly large Peregrine which gave some spectacular views today. Buzzard, Kestrel and Owls putting on a good show ... and of course for a lucky few (JA included ) a Red Kite. 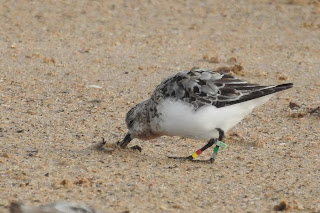 Reply received from Colin Corse re bird above.

Many thanks for your sighting of the colour ringed Sanderling and excellent photo.  It is the first one from the east coast of the birds we ringed in May.  We have had two other sightings from this catch, one from Isle of Man and one from .  Details of the bird attached.

Colour-ringed birds always a treat. These Sanderling had me puzzled for a while. Both having Red above Yellow. However, a quick input on

and I had an email from Jeroen asking for more details. Jeroen is always quick to respond and after more analysis of the photos concluded that one was an Iceland ringed bird (Jeroen's) and the other a Scottish ringed bird. I have been promised more info once the database is updated. 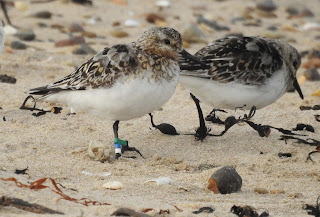 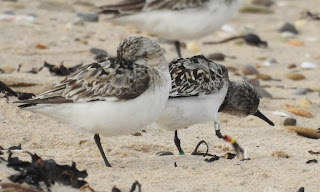 This was all after a dismal morning learning more about the Wildlife Trust and their Spotted Sandpiper.
Posted by baybirding at 08:32