A Hint of Summer 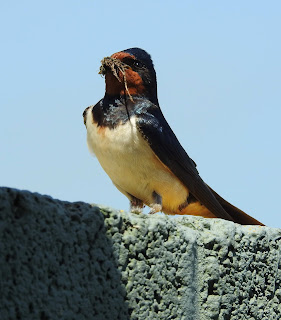 No, sorry, your camouflage is not good enough!

The hides provided by NWT finally have some thankful visitors. 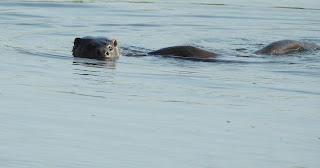 Two broods of 6 and 5 Mute Swan cygnets seemed to have disappeared. Only one cygnet was on the North pool on Monday and Tuesday. I thought Otters may have been responsible. Today the group of 6 cygnets returned? (We're still missing 4.) 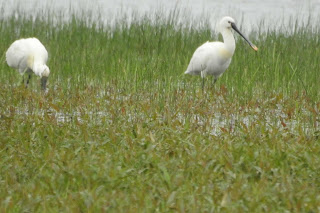 Having been at Chevington early morning, hoping to hear a Crake calling, I reversed my daily route and followed with visits to Lynemouth, Cresswell and Druridge.

Sadly the Crake which gave the briefest of flight views on Tuesday was not seen and not calling. It was small (smaller than Water Rail), pale brown and short bill. 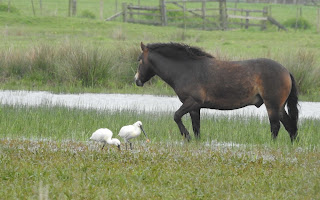 So I eventually arrived at Druridge and stumbled upon two Spoonbills. Having just left AC and MS, and having said Spoonbills were at East Boldon yesterday I still hadn't expected to see them so soon. I noticed JA's car but couldn't see him so decided to call ... straight to voicemail. I was sure he must have seen them and sure enough, he had already spotted them from the Budge Screen, but had left his phone in the car. 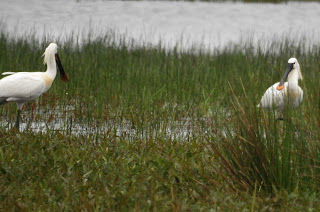 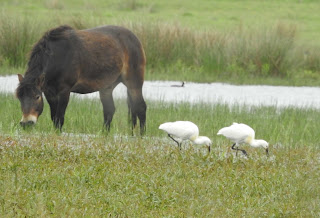 I let AC and MS know the good news but before they arrived the horses started galloping around the field and the Spoonbills decided to head off North. Amazingly they were not relocated. 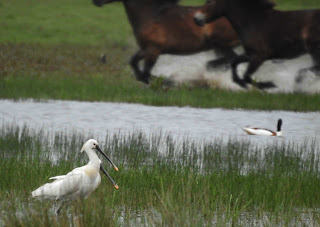