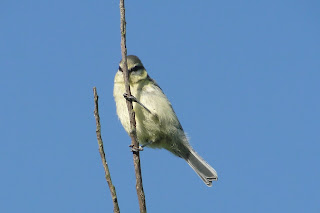 Blue Tit playing hide-and-seek. (As successful as me hiding behind an elephant.) 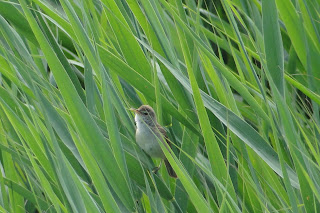 Reed Warbler hiding in the reeds. (But couldn't keep his mouth shut; reminds me of me!)

A Red Kite with a darker bird had me dreaming of the two birds on the Farnes yesterday. Pleased with the Red Kite, the smaller, darker raptor was one of the Juv Marsh Harriers.

Finally as the North Pool had been revealing a nice muddy edge and regular sightings of Water Rail; several people predicted Spotted Crake. So 15:30 today, a Spotted Crake (Juv) walked back and forth. It was often obscured by the reeds but wouldn't pass the Grey Heron (at one end of a 5m strip of shallow water) and  Snipe at the other end. It revealed the white leading edge when it was startled by the Snipe, and the obvious buff undertail coverts where the main clinching obs. The flank makings were fairly difficult to make out which led me to think it was a Juv.
Posted by baybirding at 08:57