Top of the Scops News of a Scops Owl in had me considering a twitch, but the thought of many people at the twitch made me decide against a visit. Lack of any news on Friday and I was relaxed about going to Cambois for some early morning birding. Later on Saturday afternoon the Scops Owl had been located and so an early trip Sunday with STa was planned. I hadn’t realised how close the site was (less than one hour from home). We arrived to negative news and a persistent rain shower. We headed home after an hour and only negative news of the bird was given out the rest of the day and Monday. Worryingly STa had seen a Sparrowhawk fly out from the Sycamores with a ‘bulky’ bird.

Tuesday after a quick check at Druridge and Cresswell I headed for the shops. After shopping a check on the RBA news page would help me decide which route to take home. News of the Scops Owl being present meant it wasn’t any of the routes I had planned. A call to STa and he couldn’t get away. So with a car load of shopping I headed for Ryhope. A frustratingly long journey through the Silverlink roadworks but eventually, after ninety minutes, I was walking to the spot and immediately saw the Scops Owl in bright sunshine. 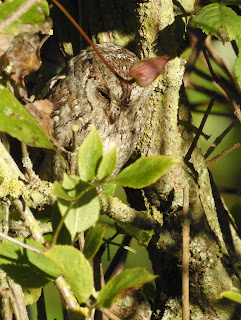 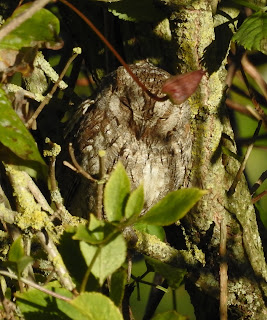 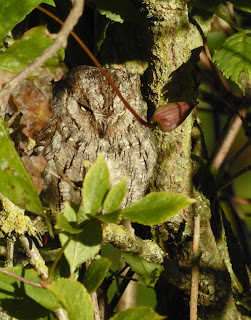 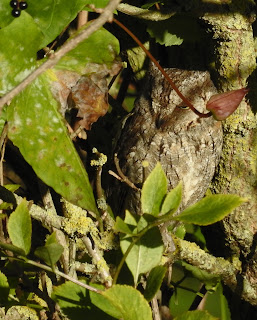 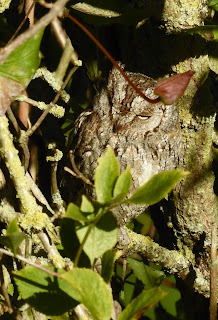 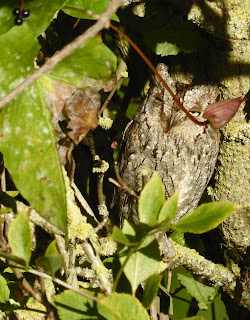 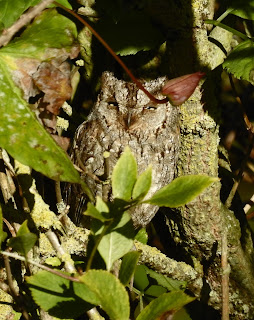 The Scops Owl was being buffeted by the wind and had leaves partially obscuring it but it was a delight to watch. Occasionally it partially opened its eyes and on one occasion it had a bit of a scratch. Only about ten people were present when I arrived and when I left there were about twenty.

A big thanks to Tom Middleton for finding the bird and getting the news out so people were able to make the choice about seeing the bird (and to Tom and other local birders for checking subsequent mornings and updating the news pages). I hope all the Northumberland birders who twitched the Scops Owl will put their news on the National Bird News services in future (give and take)? 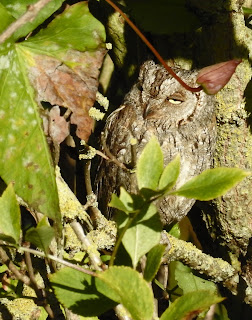 Oh and I believe there were two good birds on the Budge fields in the last week. No further details available.