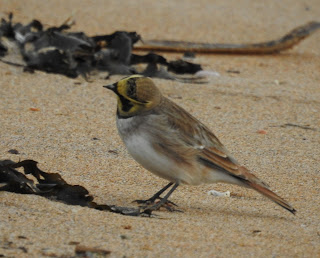 19th November last year I came across six Shore Larks on the beach at East Chevington. This morning one was present (a month earlier than last year)! Hard Winter coming?

The only problem I have with these fabulous birds is that I keep typing Shorelark instead of Shore Lark. Memo to Self! 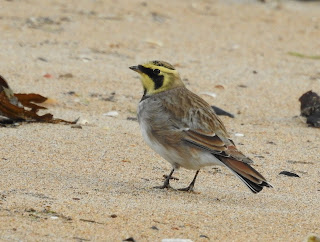 Hopefully it will not be a cold Winter, as a Cetti's Warbler was singing again at East Chevington. RBA were a little tardy at getting the information out (I had to ring them a second time) and when the first birders arrived it was the same story as Saturday ... the wind picked up and the Warbler fell silent. To my relief, JB, sent me a tweet to say it started singing again later this morning. I managed a brief view early morning in the company of a wren and a short flight above the reeds. It appears there have been several seen, in the North of England this week, so hopefully some will stay and expand their range. (About time we had a similar dispersal of Bearded Tits although they tend to disperse earlier in the year I think.)