What a Turn-up (or Turnip)? 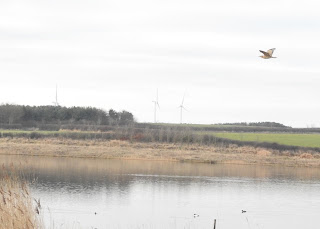 For three months the Bittern has been in residence but this was only my fourth sighting, despite daily visits. 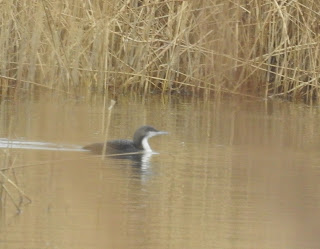 Thursday saw reports of a Black-throated Diver at Cresswell just as I sat in the hide and then saw a Diver in the distance at Chev. There was so much happening, Otters Splashing in the reeds, Kingfishers, Bittern and Water Rails that the diver didn't get my full attention. But, then I noticed it didn't have a white flank patch. Immediately I looked for a chin strap but it wasn't there ... so it couldn't be Pacific. (Yes I'm the Turnip!) 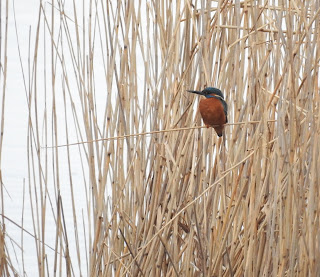 Heading  home I met several birders. I mentioned my mystery diver and suggested it was worth a look. Two birders mentioned a Snow Bunting on the beach so I turned around. 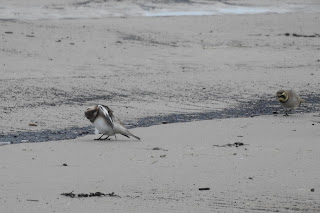 At the beach I met GS and his partner and I mentioned my funny Diver. Just as he asked, I answered ... no chin strap. We left it there.

Friday I met AMc and he mentioned the Black-throated Diver was still on the  Pool. I mentioned the lack of flank patch but the conversation went nowhere. Apparently other people had also seen it. 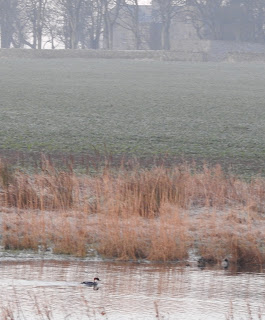 Friday night and AC was brave enough to pronounce it was a Pacific Diver and he had some decent photos. I decided that Saturday morning that the Park Run crowd and a big Twitch wasn't for me so I headed for Bamburgh 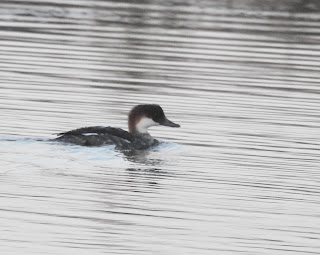 The Smew at Monk's House Pool gave itself up easily although it was still dark. (Next photo was taken ten minutes later.) 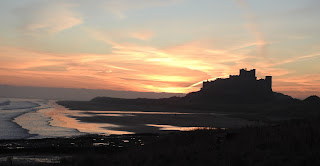 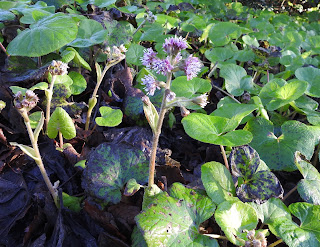 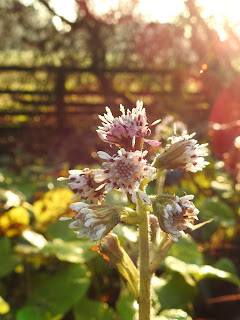 Found these rather splendid Butterbur (Petasites hybridus)on the way back. Ouch! Yet another ID mistake. (Not a Turnip this time?) This is in fact Winter Heliotrope (Petasites fragrans) which makes much more sense. The flowering of Butterbur is usually Mar-May cf Winter Heliotrope  Dec-Mar. An example of carelessness as captions in field guide were close to same plant. I should have put more effort into reading the text. 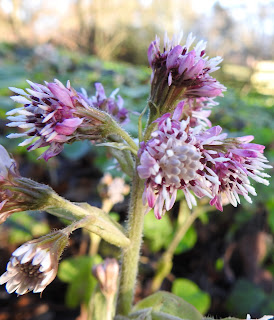 I scanned Budle Bay, Seahouses harbour and then returned to Chev to judge the size of the Twitch 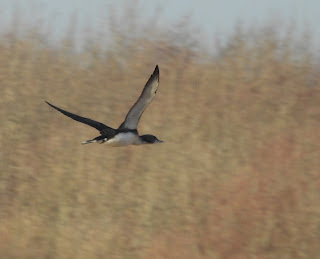 I timed my arrival perfectly and was treated to a close encounter as it flew over my head, quite low and towards the sea. It then turned and flew straight back over my head and landed on the ice. 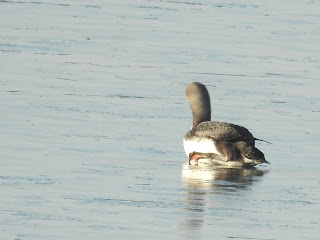 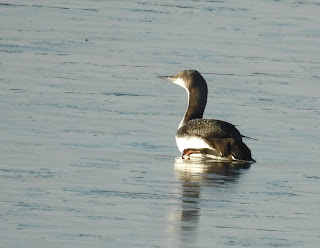 After securing a few snaps and chatting with a few people I headed home. 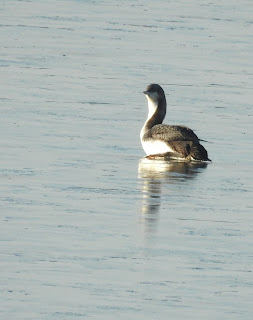 I was quite pleased with the pictures until I heard it had flown to Ladyburn Lake. So I headed back as there would be chances of  getting closer and better photos. Unfortunately the Twitch had increased and I didn't fancy joining the masses. Maybe tomorrow?

On Thursday I should have been more diligent as I might have twigged if I'd looked at the 'First Pacific Diver for Spain' photographs (in Birding World 277, Feb 2010). The Chevington bird is in similar plumage to that one. The North Yorks bird which I went to see in 2007 is very different. (Birding World 241, Jan 2007). The facial pattern and head shape are very variable so that didn't help, but the fly over today was a great help at satisfying my curiosity. (Hope it moves on quickly so I can get my patch back ... ha ha  ... miserable old me!)

Another addition!
I have just been reading Birding World 254 (Feb 2008) and I am still confused. The head shape of the Druridge bird is a better match for Black-throated Diver.

Finally! It appears this is the same bird photographed by TL at Blyth. So I guess he becomes the finder of Northumberland's first Pacific Diver and AC the first to identify it. I hope the next rarity I see is a Blue-cheeked Bee-eater, I think I could just about identify one of those. Bring on Spring!