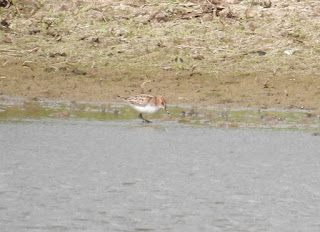 Lovely walk to Druridge this morning and avoided the heaviest shower. Saw a small  wader at Druridge and suspected it was a Little Stint but too distant to be certain. On the way back it was a little closer and it was clearly a Little Stint.

By now my morning was almost over. Dark clouds heading my way. So I texted AP about Stint and told him I was heading home before the rain. Oh no I wasn't. After crossing the stile to head home I heard the unmistakable, raucous call of a Great Reed Warbler.
I sat down recorded the song and hoped for a glimpse. Eventually a pair of Reed Warblers were agitated by the GRW and chased into the vegetation. GWR made one brief appearance and my camera worked. Yes! Normally I get a blurred photo or an empty branch. The GRW then flew along the reedbed. Out of sight but most definitely not out of hearing range. A short deliberation and looking at the site I decided this bird could be safely twitched and I put out the news. 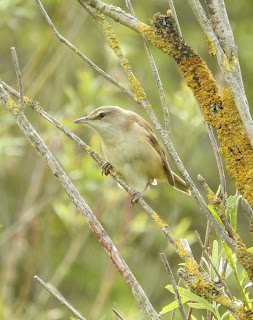