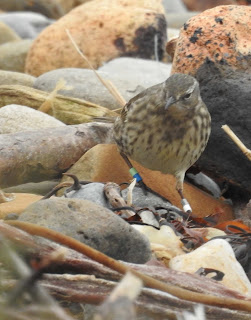 This colour-ringed bird was feeding on the beach at Hauxley yesterday. I think it was ringed in Scotland (Aberdeenshire) but I'm waiting to hear from the ringer. 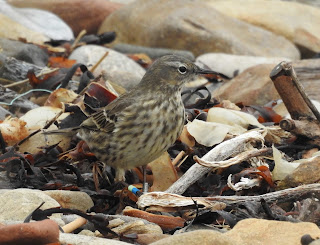 Hi David,
thanks very much for reporting your sighting, which is indeed from my project in Aberdeenshire. This is a very interesting record, hence the number of people copied in.

Ringed on 19/03/2015 at St Combs, just south of Fraserburgh. I thought it might be a Scandinavian bird, as St Combs seems to be a final stop-over before they head across the sea in spring, with not many there for the rest of the year. The bird was feeding frantically (I caught it three times that morning, & it must have eaten about 5 mealworms), and had rather pale outer tail feathers. I think it was just starting its pre-breeding moult, so the other features that distinguish the Scandinavian littoralis race birds were not yet very obvious.

It was not seen again until 19/12/2015, when it was photographed in Ayr Harbour, south of Glasgow, a movement of 296km. This was the first bird reported any distance south of Aberdeen, after 7 years of colour-ringing them. This was closely followed by a chick turning up in Fife, 2 years after ringing.

Little is known about wintering Scandinavian birds, since it is nearly impossible to distinguish them from British birds until in breeding plumage.

Your photos show that this bird is in the middle of its moult: grey feathers coming through around the head, pale eyestripe appearing & breast spots disappearing, with a possible pink tinge showing on just one of the photos. This will likely reaffirm opinion that this is indeed a Scandinavian bird.

I will keep a lookout for it back at St Combs over the next few weeks, and hope that it will be seen during the breeding season. I imagine that it will head north soon, but if it stays around for a while, more photos of it further through its moult would be great.

Many thanks once again for your valuable record and great photos.
Best wishes,
Amanda 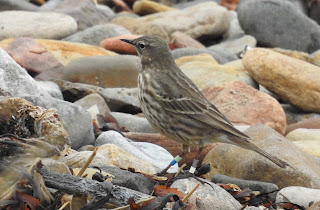