Early start at Druridge and the first birds heard were Snow Buntings. On to Chev and I met M&S they mentioned  Snowbs on the beach including 1 Male. When I got there no sign. So a scattering of seed put on the beach and a check around the Southern Reedbed; no Bearded Tits (22 Whoopers inc 8Juv.).

Another check on the beach ... nothing. Close in shore all three divers, the best an immaculate Black-throated in summer plumage. A walk up to Hadston along the beach, returning via DBCP. Nothing new to record so back to the North Pool (a Bittern flew along the shore and landed  the reedbed near the hide and back on the beach finally 3 Snow Buntings), here I was told the male Bearded Tit was seen this morning but it didn't show during my brief visit.

Fortunately I added Bearded Tit to the patch list in January but it was only today that Snow Bunting made it on to the list. My afternoon visit was aborted when I saw all the cars at Chev, so I headed for Stobswood and Widdrington Moor. Widdrington Moor had an impresssive 160 Teal alas none had the vertical white stripe. 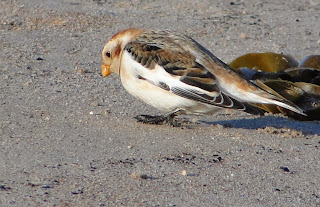