No! Not my normal Grouse Grouse.

The morning didn't start too well when I arrived at Chevington without my phone. Fortunately there was little to report. The long staying, Long-tailed Duck was the best on offer. So Plan B, back home for phone, Ashington for some shopping, back via Linton to try and relocate the crow (no luck). Plan C QEII country park to search for Smew (no luck). Plan D back home via Cresswell and Druridge. 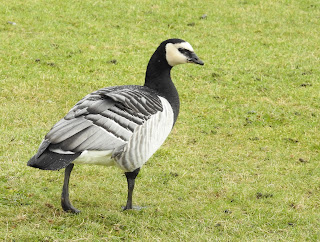 The resident Barnacle was at QEII. I also had another with Canada Geese at Cresswell this week.. Just as I was driving past Cresswell I decided not to stop, until I saw the unmistakeable shape of a Crane approaching low over the fields 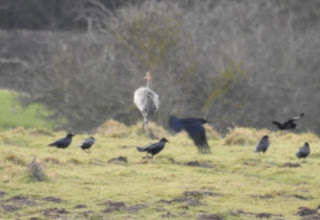 A very quick record shot a few frantic calls and I watched the Crane walk out of sight into the dip to the West of Cresswell Pond. I noticed someone in the hide at Cresswell, he must have seen the bird. Then RF drove past but clearly didn't see me shaking my gloves at him and he continued on. My next sighting of the bird was as it flew low over the fields heading South. %&**£" 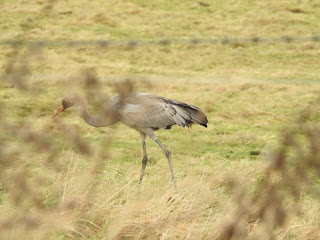 I spoke to HG and informed him I was going to try further South. To my amazement it was right by the road at Lynemouth. RBA must have been fed up with my on off messages by now. Using the car as a hide I tried to get some photos. The trouble with little cars is that fences get in the way. 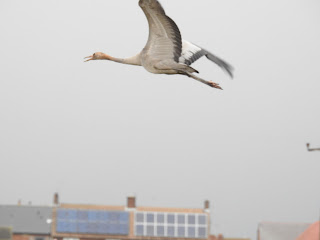 As a car passed on the other side the Crane flew but landed again in the middle of the field. 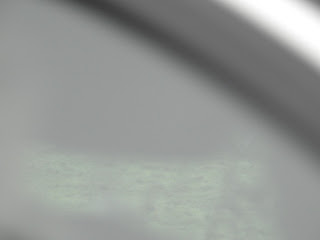 Just as I was going for another flight shot this car passed me. 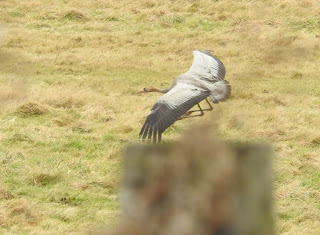 Then it landed right where a post obstructed my view. 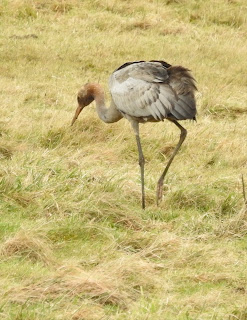 Finally it walked into an open area and I got my photos. ;-) 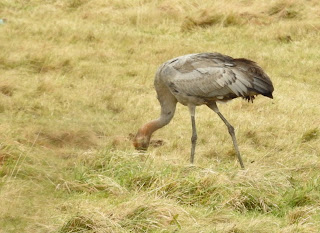 Suddenly the Crane took flight again and through the fence I could see it pas the turbine at Lynemouth. Seconds later HG arrived. Fortunately the bird was seen by  HG and other observers at Newbiggin and Cambois later.