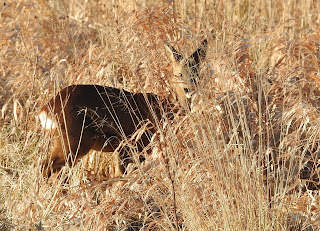 Two Roe Deer have taken a liking to a small field near he North Pool, East Chevington. It also as three ponies and a flock of Shetland sheep grazing there too. 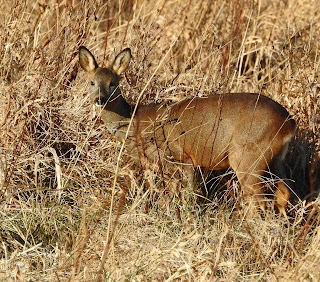 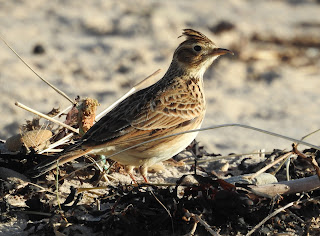 This Skylark has been in the same area for three years now. It as no trouble feeding with its long de-curved beak. 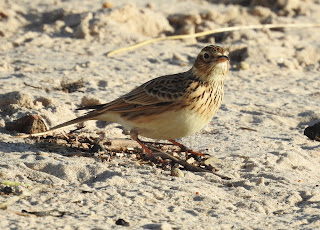 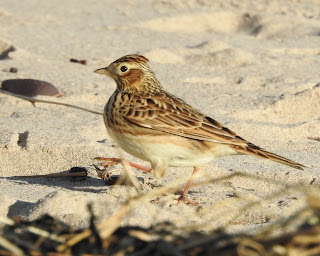 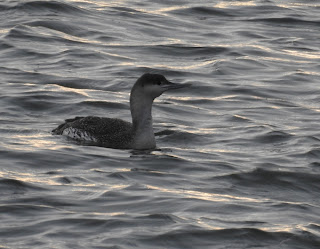 Older and Wiser?
No I think my ID skills are failing me or I'm becoming careless?
I saw this diver in the distance from South Shields Pier. Steep forehead and White flank patch, I confidently thought, Black-throated Diver. Cropped picture at home and blotchy flanks, lack of dark/light contrast, bill shape and position and it is Red-throated. Oddly enough there was another Red-throated Diver there also but it seemed very different. 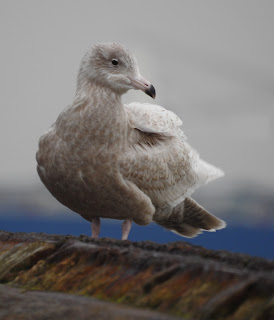 This was my second attempt to see the South Shields Glaucous Gull. A walk along the pier and we failed to connect, however as we walked away a local birder came hurrying towards us (Many thanks!) to tell us it had just landed. As we walked back it flew towards the shore with two GBB Gulls. Definitely time for coffee so as we left again (without any snaps) but again it flew back to the end of the pier.  This time it settled to preen, snaps were taken and then coffee was enjoyed! 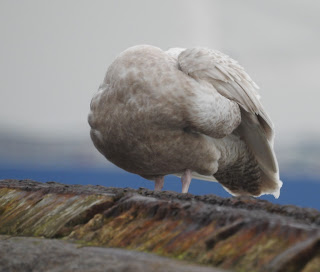 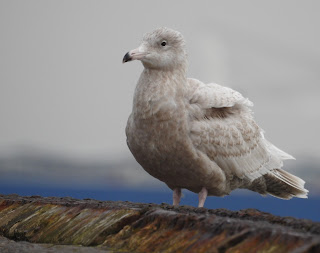 This Juvenile Glaucous is going through a period of moult. The missing feathers shown and the (Number 2 counting from wing tip) Primaries are missing on each wing. This is such a confiding bird it will be nice to see if local birders can capture the moult stages. 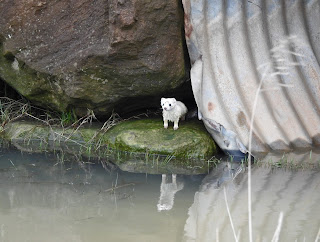 After covering my patch today I ventured inland (5 miles ... I'm not that adventurous). I was just thinking I had made a mistake (It was cold, grey and I had left my gloves in the car.) when a white flash appeared in the distance. I approached slowly over the next 20 minutes, no further sign of the Stoat. I stood around a little longer, no show. Then I spotted a flower about to emerge, perfect for #wildflowerhour on Sunday. As I took a snap I saw the flash of white re-appear. 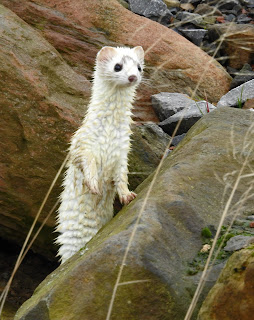 This time it was carrying a sizeable Vole. Sadly I was now upwind and it had seen me. I tried to get an
in-focus picture. With freezing fingers this was tricky. As you can see the Stoat (Ermine) was rather wet after swimming across a tiny  stream so I quickly left. The whole area was very wet so it must be struggling to survive but it clearly has been able to find food. 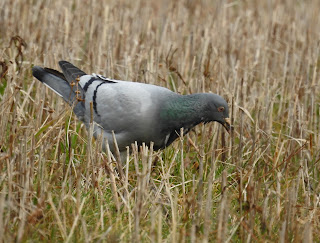 The remainder of the walk was brilliant. Spirits lifted by the chance encounter and the supporting cast of Little Egret, 3 Buzzard, Kestrel, Grey Partridge, 6 (identical) 'Rock Doves', Skylarks, Meadow Pipits, Linnets, 400 Golden Plover and 4000 Pink-footed Geese. Oh and I didn't notice the cold on the way back! 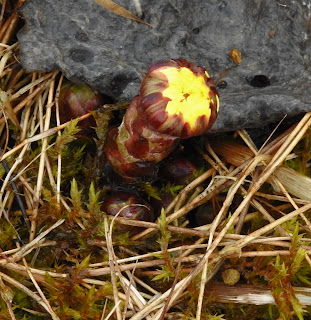