Monday
Lots of daytime migration over the patch. Larks, Pipits, Buntings (at least two Lapland heard), Redpolls and a few Grey Wagtails. Swallow, House Martin and a single Sand Martin trickled through.
Tuesday
Easterlies and heavy rain would surely ground some birds but, in the brief visits I made, there was nothing to get excited about. Well apart from 6 Swallows trying to find food along the beach and 9 Whoopers battling through the rainstorm and landing at East Chevington. 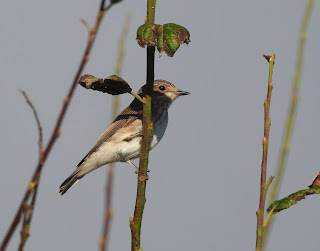 Wednesday
An early start revealed nothing. Too windy and dark so I went to do a bit of shopping. An hour or so later I was back on the patch and It seemed as though there were birds to be found. News came out of some scarcer birds at Tynemouth and on Holy Island. Just then a Spotted Flycatcher popped out in front of me. A bird with a noticeable wing bar gave brief views compared to the showy Chiffchaffs and Long-tailed Tits. Eventually the wing bar appeared on a Goldcrest mmm should have known. A consolation Whitethroat was unexpected.
A quick lunch break and the afternoon at Druridge and Cresswell provided nothing new. 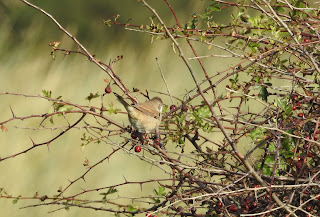 Today (Thursday)
A gentle walk around the South, then North Marine Parks (South Shields) revealed nothing of note. A visit to Trow Quarry was more successful with a Yellow-browed Warbler almost immediately. As I was about to report it RBA message came in of a Yellow-browed Warbler at the North Marine Park (typical) it was in the only part we didn't visit. 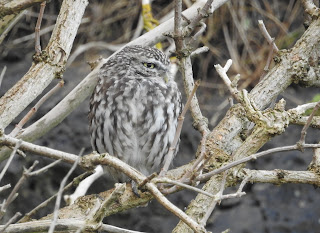 The morning rounded off with a very obliging Little Owl.
What will the next weather system bring in?
Posted by baybirding at 07:21